Semper Fi. IN MEMORY OF OUR FALLEN


We at HeroBracelets salute your service in the USMC, and we grieve along with your families. 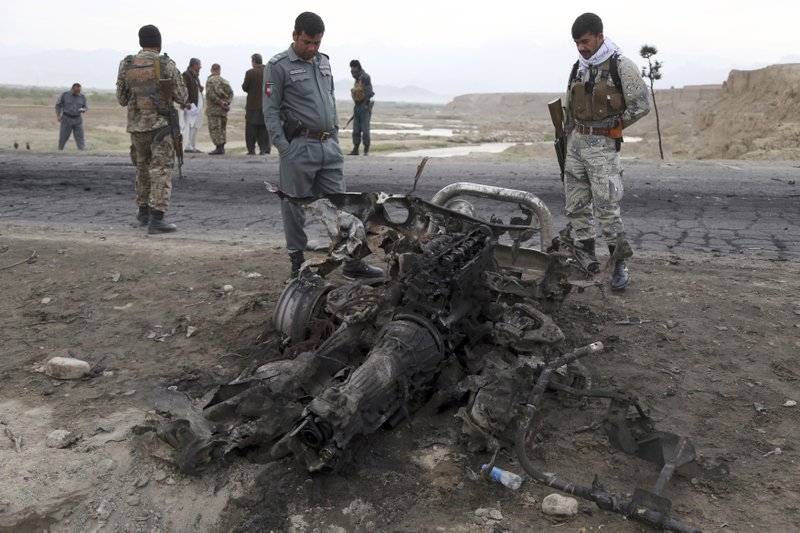 Afghan security forces gather at the site of Monday's suicide attack near the Bagram Air Base, north of Kabul, Afghanistan, Tuesday, April 9, 2019. Three American service members and a U.S. contractor were killed when their convoy hit a roadside bomb on Monday near the main U.S. base in Afghanistan, the U.S. forces said. The Taliban claimed responsibility for the attack. (AP Photo/Rahmat Gul)

KABUL, Afghanistan (AP) — U.S. forces in Afghanistan revised on Tuesday the death toll from a Taliban attack the previous day near the main American base in the country, saying three service members were killed but not a contractor who was initially reported among the fatalities.

The U.S. and NATO Resolute Support mission issued a statement “to clarify initial reporting” about Monday’s roadside bombing of an American convoy near the main U.S. base. The Taliban claimed responsibility for the attack.

According to a U.S. official, all three service members killed were Marines.

The mission said a roadside bomb hit the convoy near the Bagram Airfield, killing three American service members, and that “the contractor who was reported as killed, is alive.”

The statement said “the contractor, an Afghan citizen, was initially treated along with other injured civilians, later identified as a contractor and treated at Bagram Airfield.”

Three other U.S. service members were also wounded in the attack. The base in Bagram district is located in northern Parwan province and serves as the main U.S. air facility in the country.

The wounded were evacuated and are receiving medical care, the statement said. It added that in accordance with U.S. Department of Defense policy, the names of service members killed in action were being withheld until after the notification of next of kin.

Christopher Slutman, a 15-year New York City fire department member, was among the three Marines killed. He leaves behind his wife, Shannon, and three daughters.

“Firefighter Slutman bravely wore two uniforms and committed his life to public service both as a New York City firefighter and as a member of the United States Marine Corps,” Fire Commissioner Daniel Nigro said in a written statement.

In their claim of responsibility, the Taliban said they launched the attack and that one of their suicide bombers detonated his explosives-laden vehicle near the NATO base. The conflicting accounts could not be immediately reconciled.

On Tuesday, local Afghan officials said at least five Afghan civilians were wounded in the commotion after the attack on the American convoy.

Four were passers-by and the fifth was a driver of a car going down the road, said Abdul Raqib Kohistani, the Bagram district police chief. Abdul Shakor Qudosi, the district administrative chief in Bagram, said American soldiers opened fire immediately after their convoy was bombed.

Monday’s U.S. fatalities bring to seven the number of U.S. soldiers killed so far this year in Afghanistan, underscoring the difficulties in bringing peace to the war-wrecked country even as Washington has stepped up efforts to find a way to end the 17-year war, America’s longest.

There are about 14,000 U.S. forces in Afghanistan, supporting embattled Afghan forces as they struggle on two fronts — facing a resurgent Taliban who now hold sway over almost half the country and also the Islamic State affiliate, which has sought to expand its footprint in Afghanistan even as its self-proclaimed “caliphate” has crumbled in Syria and Iraq.

The Taliban have continued to carry out daily attacks on Afghan security forces despite holding several rounds of peace talks with the United States in recent months. The Taliban have refused to meet with the Afghan government, which they view as a U.S. puppet.

Meanwhile, the Taliban have agreed to take part in an all-Afghan gathering later this month in Qatar, where the insurgents maintain a political office. But the Taliban say they will not recognize any government official attending the gathering as a representative of the Kabul government, only as an individual Afghan participant.