Re-Enlisting at the Pentagon 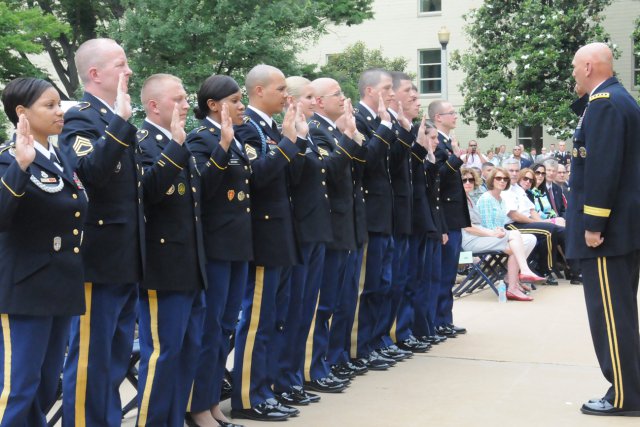 WASHINGTON (Army News Service, June 23, 2014) -- The only thing standing in the way of Joseph A. Powell enlisting in the Army was his braces.

"I had to wait one year. It was the most depressing year of my life," Powell said.

In 2008, Powell was finally able to enlist in the Army along with his twin brother, Joshua M. Powell.

On June 19, 2014, the two brothers, along with 11 other Soldiers, re-enlisted during a ceremony in the Pentagon courtyard. The event coincided with celebrations in honor of the Army's 239th birthday.

Chief of Staff of the Army Gen. Ray Odierno opened up the ceremony by reflecting on the Army's history.

"I think about the initial Soldiers who, even before we were a nation, stood up to establish the greatest nation on earth," Odierno said. "I think about the men and women today who would sacrifice themselves in order to change the course of history."

Odierno acknowledged the sacrifice and support from families of Soldiers.

"[Those families] believe in liberty and freedom. That's what today is about. It's about celebrating all of those who are willing to raise their right hand and swear an oath to the Constitution of the United States."

Secretary of the Army John McHugh highlighted other recent celebrated anniversaries: Francis Scott Key wrote Star-Spangled Banner 200 years ago, as of this year. On June 6, D-Day and the Battle of Normandy took place 70 years ago, and June 15 marked the 150th year that Arlington National Cemetery, Virginia, was designated the first national cemetery.

Arlington National Cemetery has stood as a solemn reminder of the true cost of war and just how much our soldiers have sacrificed for this country, McHugh said.

"For 239 years this Army has honored that legacy by defending freedom and keeping peace whenever and wherever the call has been raised. That is a legacy. Your legacy," McHugh said.

"Whenever your nation has called, the Army has answered, and answered willingly," Work said. "We confront some very complex security threats and challenges in our world today. Our nation is going to require an Army that is just as adaptable, just as versatile, just as ready and just as lethal. An Army that can go anywhere, fight anywhere, and defeat any and all adversaries, wherever they may be."

There is no greater public service than what Soldiers do for this country, Work said.

Following Work's remarks, Odierno conducted the re-enlistment for the 13 soldiers. Soldiers from the 3rd U.S. Infantry Regiment (The Old Guard), performed the Soldiers' Creed before the oldest and youngest Soldiers present participated in cutting an Army birthday cake.

Master Sgt. Angela Martin was one of the 13 soldiers to re-enlist.

"I re-enlisted because I am a career Soldier," she said. "This is what I want to do. I'm just happy to be here, to serve my country, with other men and women willing to do the same."