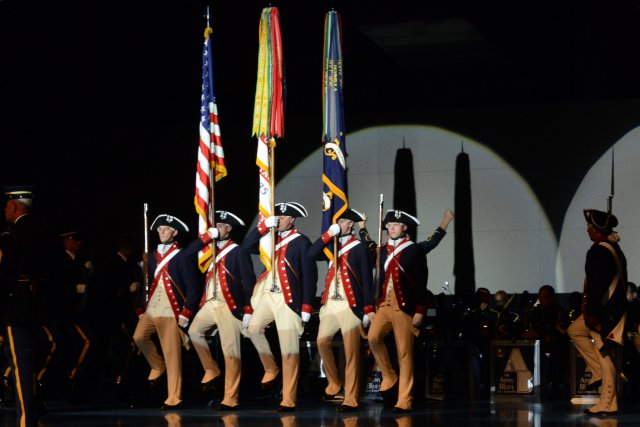 (Army News Service, June 26, 2014) -- On a summer evening in the national capital region, the Army's top enlisted advisor honored a special group of men and women who have worn the uniform.

NCOs are truly the "backbone of the Army" and have served the nation with distinction and honor, Chandler said.

"In its darkest times and its brightest times, it's been a non-commissioned officer who has been at the forefront of everything that we've asked our nation to do, our Army to do, over the past 239 years," he said.

He said the Army has faced "challenging times over the last 13 years," since 9/11. NCOs have been the most-deployed segment of the Army in that timeframe, he said, with an average of 3.5 deployments.

Non-commissioned officers are the "glue for our Army and are the key to our success," he said. The Army, Chandler said, would not be the strongest fighting force in the world if it were not for the NCOs.

The Twilight Tattoo, which is open to the public, provides attendees a history of the Army and reminds them of the service and sacrifice of service members, Chandler said.

At a reception before the tattoo, Chandler thanked all the guests, including NCOs past and present, who attended the night's events.

"Gentlemen, you honor us with your presence," Chandler said.

The former Rangers, who live in the Washington, D.C., area, took time to greet guests and share their Army experiences.

"There are four of us here today who served in Korea with the 2nd Airborne Ranger Company. We were the first and only all-black Airborne Ranger outfit in the whole United States Army," said Dias.

"We were the only all-black Ranger outfit to make a combat jump. We jumped March 23, 1951, in a place called Munsan-Ni, Korea," said Dias, a sergeant who served four years.

Allen, a retired first sergeant, said he would give today's Soldiers the same advice he gives his grandson, a Marine.

"Do the best that you can in everything," Allen said.

"Don't let anybody beat you doing anything," he said. "Be the best Soldier, shoot the rifle best, drill the best, and work hard at it. If you work hard, you'll be alright."

Robert Griffin Jr. and wife Jacqueline Griffin both served as non-commissioned officers in the Army. The two are the parents of three children, including Washington Redskins' quarterback Robert Griffin III. They said their entire family benefited from their own experiences as NCOs.

"We just went in with a spirit of 'we were going to make the best of our Army careers,' and we loved it," said Mrs. Griffin, who left the Army as a sergeant with 12 years of service. "Our children were totally blessed by our Army experience, and the instruction and discipline and all the stuff that goes along with it."

Their only son, nicknamed "RGIII," is proud to have grown up in a military family, she said.

Mr. Griffin, who retired in 2003 as a staff sergeant, said being an NCO had a "powerful impact" in shaping and influencing the family and had a positive influence on friends and their families as well.

NCOs are a critical component of the force, Mr. Griffin said.

"You need that vital link between the leadership who are making policies and the personnel who are actually enforcing the policies to develop, train and shape our military," he said.

The Twilight Tattoo is a popular Army program that features Soldiers from the 3d U.S. Infantry Regiment (The Old Guard) and the U.S. Army Band "Pershing's Own."

At yesterday's event, the distinguished guests, veterans from all branches, and visiting school groups were recognized to the applause of the crowd. The event, which was held indoors instead of on a parade field due to the threat of bad weather, saw an auditorium filled with spectators to see the pageantry and ceremony of the Army tradition.

The Twilight Tattoo traces its history back more than 300 years ago, when British troops were summoned out of the pubs by a bugle and drum call. The familiar tune told tavern owners it was time to turn off the taps, and troops knew it was time to return to the barracks.

The modern-day call is known as "tattoo." During basic training, the call signals the time to quiet down and hit the bunks.

The Military District of Washington's Twilight Tattoo can be traced to pre-World War II, when the 3rd Cavalry Regiment staged military shows on Fort Myer to showcase its capabilities.