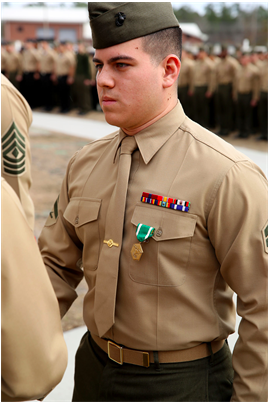 Cpl. Brian E. Babineau, a Gardner, Mass., native and a warehouse clerk with Supply Company, 2nd Supply Battalion, 2nd Marine Logistics Group, shakes hands with Lt. Col. Jesse A. Kemp, the commanding officer of Supply Battalion, after receiving the Navy Commendation Medal for saving a young girl’s life at North Topsail Beach, N.C., July 14, 2013 at an award ceremony at the French Creek barracks aboard Camp Lejeune, N.C., January 10, 2014. Babineau swam out into the ocean and brought back the young girl who was being drifted away by a rip current. (Photo by Cpl. Devin Nichols)

CAMP LEJEUNE, N.C. -- With the arrival of the weekend, Marines and their friends gathered together to head to North Topsail Beach, N.C.

This particular Saturday couldn’t be a better day to hit the beach. The sky was clear and the sun was radiant, calmed by the sound of crashing waves.

It was a relaxing way to enjoy a summer weekend.

In the midst of the calm and relaxing weekend Cpl. Brian E. Babineau, a Gardner, Mass., native and a warehouse clerk with Supply Company, 2nd Supply Battalion, 2nd Marine Logistics Group, and his friends were lying on the beach when they heard a scream.

The Marines stood up, curious of where the scream came from.

“An older woman yelled from next to us ‘help there is a girl drowning out there’,” said Babineau. “As soon as I heard that I started to run to the water and dove in.”

Without hesitation Babineau swam to the young girl screaming from far out in the ocean.

“When I got to her she was in a panic and was thrashing around,” said Babineau. “I told her to relax and put your arms around my neck, and then with my left arm I trapped her body against mine and started to swim back with her.”

The waves were massive and the young girl was trapped in a rip current, but that didn’t stop him.

“It was a really strong current and it started to take me in,” said Babineau. “I had to keep myself calm while I was swimming so I didn’t freak out. Then I told her when the waves come crashing to hold her breath so she doesn’t swallow any water. It took me 10 to 15 minutes to get back to the beach. Once we got closer to shore I started to use my feet to push myself closer to land, so I turned her in front of me so that she didn’t get hit by anymore waves. When we reached land she ran straight to her father.”

The little girl calmed down realizing she was safe and thanked Babineau for his actions.

Several months later Babineau was recognized for his actions on the beach that day. Here, at the French Creek barracks Jan. 10. a formation consisting of Supply Battalion Marines and sailors came to attention as Babineau received the Navy Commendation Medal for his heroic engagements on July 14, 2013.

“I tell you what, I have been looking forward to giving this award out ever since we have been moving it up the [chain of command],” said Lt. Col. Jesse A. Kemp, the commanding officer of 2nd Supply Battalion, 2nd MLG. “This is truly an inspiration, this is probably one of the most inspirational awards that I have had the personal pleasure of delivering, and that includes some combat awards I have given as well.”

After Babineau received his award, the battalion commander gathered the service members together and used him as an example of character.

“It’s about being willing to act, and that’s why Cpl. Babineau’s actions were so inspirational,” said Kemp. “What he did was prove that we are Marines 24/7 and our training and character can kick in at any time.”

“It felt good when the Marines congratulated me after I received the award,” said Babineau. “It’s truly a blessing.”